Point Defiance, the spectacular jewel of scientific rigor and pleasure, isn’t just an inspiration for our team’s name and identity, it’s a source of pride for an entire region. It’s a public park, zoo, and aquarium. The point and bluffs are the southern frame of the bay and the northeastern corner of the narrows. Lush and green amid the urban growth of Ruston, Point Defiance inspires the people of Tacoma to connect with nature and learn more about our surroundings.

In 1944, Point Defiance Park was the inspiration for the ship in our logo. The USS Point Defiance took to the oceans in 1955 assigned the Pacific Fleet, a natural fit for a ship named after a park along the waters of Puget Sound. Following two peacetime patrols, the 510 foot dock landing ship helped further the efforts of the global scientific community. 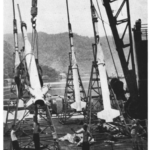 Like it’s bountiful namesake, the USS Point Defiance served more than one purpose. In 1958, the ship of war became a ship of science. During the International Geophysical Year of 1957-8, USS Defiance was the first vessel to launch sounding rockets in support of the mission to study the solar eclipse. These rockets launched 125 miles into the sky brought back X-Ray and UV data. The mission was just off of Danger Island. We mention Danger Island not because of a connection to Tacoma, but because of its awesome name.

LSD-31 was involved in multiple combat missions in Vietnam. Thousands served aboard the vessel. Chief Norm Atwater served on a two of those tours. Atwater maintained the ballast system, used to lower the ship below the water line so Marines could disembark, and a fire suppression system to keep the ship and crew safe.

In his 24 years with the U.S. Navy, Chief Atwater served on eight ships. One of those shared our name. Now 76, the veteran speaks of his service fondly.

“I loved the Navy and would do it all over again if I was younger but the good memories outweigh the bad times. A lot of time at sea, and several times crossing the dateline and going into some of the worst weather in the North Atlantic, but so many different ports of call that I would have never been able to travel to.”

On Veterans Day, Tacoma Defiance want to honor Chief Atwater and all who have served our nation. They, like the Pt. Defiance, are more than soldiers, sailors, airmen, Marines and Coasties. They are our neighbors, coworkers, friends and family.

We share a namesake with the USS Point Defiance and, like that proud vessel, we will not be confined to a singular purpose.