In all its splendor, an imposing visage looms in the distance of Cheney Stadium. Just beyond the sightline of the grandstands, the 14,411 foot volcano Mount Rainier sits in all its wisdom. Like a magnet, it calls all eyes to its to its ancient form. 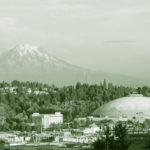 In front of the most topographically prominent mountain in America stand different groups of fans – families and flag wavers. Young and old all cheering for Tacoma’s team.

In front of them is the goal – the opportunity to score. Players see those exact things when they take the pitch for their squad – opportunity and community.

After Matt Nance went undrafted he received “a couple other offers,” but he chose Sounders FC because of the interwoven nature of First Team, Tacoma Defiance, and Sounders Academy.

“I think they do a good job bringing people up to the First Team from Academy and Defiance so I thought it was a good opportunity to get First Team looks in MLS, which is what I want to build up to eventually.”

Growth is part of who we are. It is Tacoma and it is Defiance. It is realized opportunity. It is the contracts of Nouhou, Delem, Leyva, and Ocampo-Chavez. Our community is also why players flock to Puget Sound.

Azriel Gonzalez joined Sounders Academy from Las Vegas. Like Nance, other teams wanted his services. The booming soccer fanbase convinced the scoring threat to move to a new state.

“When I went to the Sounders game and saw the fans and that the city was together, that made the decision for me. I saw how supportive the city is. That gave me my final answer.”

Now he gets that encouragement from the fans at Cheney Stadium.

“A lot of the players have big aspirations. We want to play in bigger stadiums in our career. This gives us a taste of what it’s like with the fans.”

Drafted in the 3rd round of the MLS SuperDraft Aleks Berkolds earned a contract with Tacoma Defiance. Like his teammates, community and opportunity fuels his choice.

“That we still have the fans at Cheney Stadium behind us is a really nice feeling. We have that strong backbone in support.”

Nance could have been talking about our city when he described Cheney Stadium, “I think it’s a little bit funky, but that’s what’s fun.”