Defender Theresa Nielsen joined Reign FC in 2018 from Vålerenga in the Norwegian Toppserien. Since then, she has become a critical part of the club’s back line and helped the club spark quick attacks as a right back.

Nielsen was first contacted by her agent about the opportunity to come ply her trade in the United States. 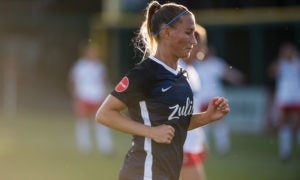 “It was my agent that was calling,” Nielsen said. “I talked with Vlatko and he told me what he was thinking about the team. We didn’t talk for a while and then three weeks later, the offer was on the table. I always thought the U.S. is interesting. Saying no to this offer was impossible. Who wouldn’t want to play here with the best players in the world? It was a challenge I really wanted to take on. I talked to my husband and we agreed that I couldn’t say no to it. We packed our bags and off we went.”

One of the most attractive features of the NWSL was the chance to be a part of a fully professional environment. With Brøndby IF in her native Denmark, Nielsen had won four Elitedivisionen titles, but still had to work a full-time job in the nation’s home care system taking care of the elderly to make ends meet.

“It was hard working 40 hours and then having to go to practice and trying to be focused,” Nielsen said. “No one can do that for a long time. It was hard.

“Compared to what I’m used to, this is really professional. Denmark wasn’t professional in the way we lived, because we all had to work other jobs. On the field, we tried to be as professional as possible. In Norway, I didn’t have to work, but I still had a lot of teammates that had to work so practice was in the afternoon. Coming here where everyone is 100 percent focused on soccer is such a step up. I can’t imagine leaving this life. I don’t think that life can get better than this. I’m so thankful for getting this chance. You have people to help you with everything, even getting you water if you’re tired. I’m so thankful. I only have to focus on being ready, so how can I not be ready? It’s the best life ever.”

Nielsen feels her game has evolved while playing in the United States. The fullback hasn’t recorded an assist, but has made 20 key passes and has used her speed to help the attack break through pressure on the right side of the field. 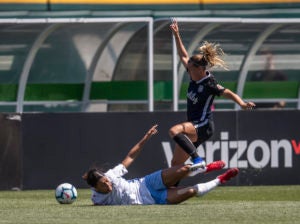 “I think I’ve become a better defender,” Nielsen said. “I’ve had to. The quality of players you play against here is so high. In Denmark, I could only focus on my offensive play, because I didn’t really have to defend. Now I have to do both. The other thing is that everything here is so sharp and so fast. You have to be ready all the time. For sure, I’m a better player. Even though I’m 100 years old now, I think that these two years have been some of the best of my career. I’m a smarter player and I’m thankful for that.”

Two years into her American adventure, Nielsen is enjoying the bond she has built with teammates and the relationship between the club and its fans.

“I like living by the water and living close to all the girls in the apartments,” Nielsen said. “I’m really enjoying being in Tacoma and getting together with the girls. I like having a social life besides soccer, it’s been great. I’m giving a big thumbs up to Tacoma. Being at Cheney with the fans has been amazing.”

The 33-year-old jokes about getting older, but with the development in her game and the spring in her step that she puts on display with Reign FC, she’ll likely be frustrating opposing wingers and burning past defenders for years to come.

Reign FC have three matches remaining at Cheney Stadium in 2019. Tickets are available.