Former Tacoma Rainiers and Seattle Mariners star Adam Jones is off to Japan’s Orix Buffaloes. The outfielder is now with the club where his former teammate Ichiro Suzuki’s legendary career began.

The top three MLB free agents all signed. During the Winter Meetings, Stephen Strasburg ($245M), Garrit Cole ($324M), and Anthony Rendon ($245M) inked massive contracts. History was made and dinner is surely on Scott Boras, the agent for all three handsomely paid stars. 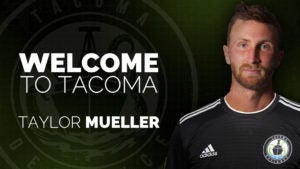 Defiance strengthened the backline and added a full year to their average age with the signing of Taylor Mueller. The 31-year-old spent the last four seasons as the captain for the Charleston Battery and played more than 17,000 minutes with the historic Eastern Conference club. He won the championship with them in 2012. It is a return home, of sorts, for the University of Washington grad and Kirkland native.

Alec Diaz keeps dominating with the Sounders Academy. Now with 54 goals in 58 games at that level, the youngster is ready to level up.

Two championships and a trip to the playoffs every year earned Seattle recognition as the best MLS side of the 20-teens with three players making the Best XI (Stefan Frei, Chad Marshall, and former Sounder Osvaldo Alonso) of the decade. Sigi Schmid, Brian Schmetz, and Nicolas Lodeiro were all mentioned as runners up.

Former Sounders Academy player Paul Rothrock won the NCAA championship with Georgetown. The attacking midfielder played with Sam Rogers and Shandon Hopeau before signing with Notre Dame and then transferring to Georgetown. He scored 4 goals and assisted 7 times this past season.

Charlotte is the latest city to join MLS. The expansion side begins play in 2021.

Two USL sides with powerful histories rebranded. The Charleston Battery went for a clean, modern approach that honors their legacy as the oldest continually operating pro soccer side in the U.S.A. Louisville City is opening their new downtown stadium with a new look, new name, and tweaks to their colors.

Expansion side San Diego Loyal talked Sal Zizzo out of retirement (a move inspired by Landon Donovan?). The SoCal native is their first signing.

We simply had a wonderful time seeing everyone at the Downtown Tacoma Holiday Haul Crawl. Santa, Rhubarb the Reindeer, Epic Sax Gorilla, and Jack the Bear had a blast meeting you all both in the photo booth and on their stroll along Broadway.

Do you know someone who is Defiantly Tacoma? We have the perfect gift guide for the proud South Sounder in your life.

The Tacoma Team Store is open today through Saturday and then Monday the 23rd from 11 a.m. to 5 p.m. Pick up your last-minute gifts as the store is closed from Dec. 24 through Jan 1.