TACOMA, WA – Major League Baseball (MLB) today announced the 142-game regular season schedule dates for the Tacoma Rainiers and the other nine Triple-A West clubs, with Opening Night scheduled for Thursday, April 8. This season is the first within MLB’s new player development system as outlined by a new Professional Development License (PDL). 2021 also marks the inaugural campaign for the Triple-A West, which features nine clubs from the former Pacific Coast League in addition to the Sugar Land Skeeters (HOU).

The Rainiers will play 24 series (23 six-game series and one four-game set), with nine homestands and as many road trips. Tacoma will host 72 home contests and play 70 road games. Each Wednesday during the regular season is a league-wide off-day as part of MLB’s plan to “create many improvements to the experience and lifestyle of Minor League players,” and there will be a three-day break from July 12-14. Tacoma’s lone four-game series, July 8-11, is also its only trip to Sugar Land, TX to play the Triple-A newcomers. 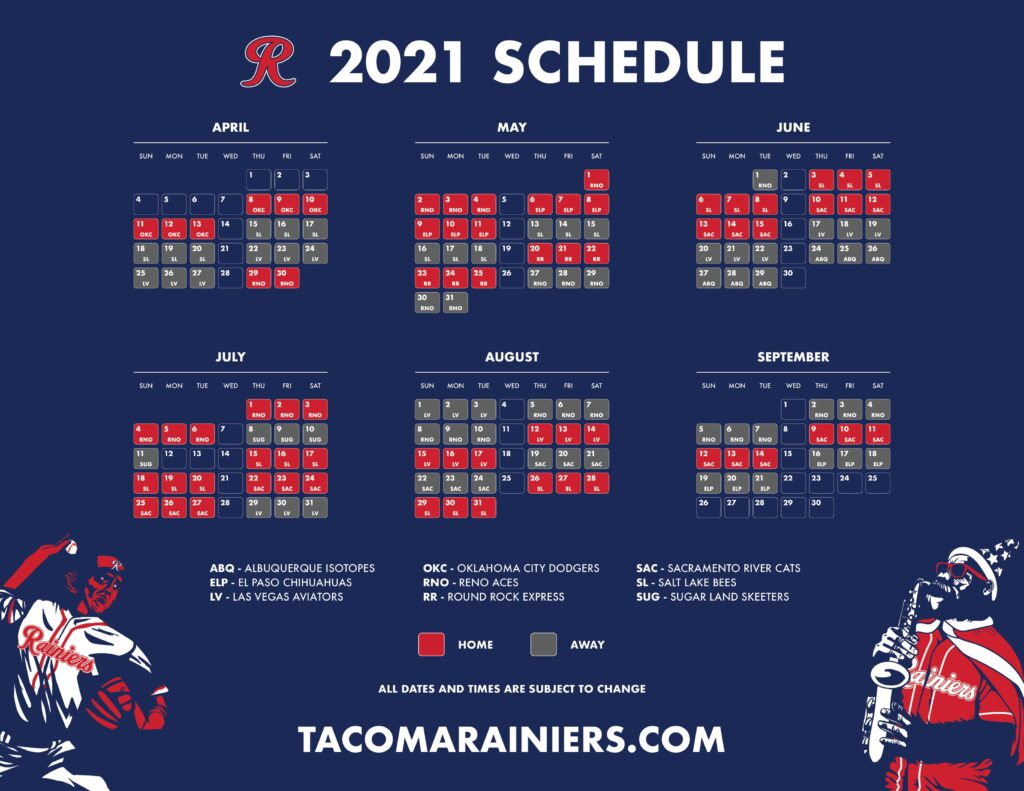 Tacoma opens its season at home on April 8 with six games against Oklahoma City before the first 12-game road trip through Salt Lake City, UT and Las Vegas, NV against the Bees and Aviators, respectively. The final home series of the year is Sept. 9-14 against Sacramento, and the regular season will conclude in El Paso, TX on Sept. 21 against the Chihuahuas.

Within MLB’s new schedule structure for 2021, the Rainiers will still host a home contest on Saturday, July 3 against Reno, and will also play a Fourth of July home game versus the Aces.

The Rainiers are continuing to follow Washington State and Pierce County health and safety protocols concerning COVID-19. The organization is working closely with state and local health officials on how and when fans can safely be welcomed back to Cheney Stadium. The Rainiers are committed to providing a safe environment for Cheney Stadium goers once attendance is permissible, and will continue to provide updates via social media and WeRTacoma.com.

“We are just as anxious as our fans to get people back inside Cheney Stadium for Rainiers baseball,” said Tacoma Rainiers Vice President of Sales Shane Santman. “We’ll be contacting season ticket holders, group ticket buyers and our partners to find ways to accommodate them and provide an outstanding ballpark experience for all once it’s deemed safe.”

For questions regarding 2021 season ticket sales, contact the Rainiers via email at Tickets@WeRTacoma.com.

Game times for the 2021 season will be announced at a later date.

Tacoma will be the highest level affiliate for a Mariners player development system that ranks second according to Baseball America, and boasts six of the Top 100 Baseball Prospects according to MLB Pipeline. All six prospects participated in Seattle’s 2020 Alternate Training Site at Cheney Stadium, including the organization’s top prospect, OF Jarred Kelenic (No. 4 overall prospect by MLB Pipeline), OF Julio Rodriguez (5), RHP Emerson Hancock (31), RHP Logan Gilbert (33), RHP George Kirby (92) and OF Taylor Trammell (100).

The Tacoma Rainiers are the Triple-A affiliate of the Seattle Mariners. Tacoma is a member of the Triple-A West, which will begin its inaugural season on Thursday, April 8. The Rainiers play at Cheney Stadium, which opened in 1960, and the team has been a Mariners affiliate since establishing the Rainiers moniker in 1995.