Soccer, football, futbol, calcio – whatever you call it, this game is empowering and equalizing. There aren’t separate codes or rules based on gender or age at the professional level. Austin Brummett (the youngest to take the pitch in USL action) and World Cup star Megan Rapinoe play within the same 70 by 110 yard lines on an all-grass pitch at Cheney Stadium. Players from Puerto Rico, Haiti, Cameroon, Australia, Spain, Japan and all over the United States call this field home.

Now the home to two professional soccer teams, Cheney Stadium gives Tacoma perspective of how the game is shared between all who play. World Cup stars, Shield winners, those grinding through careers, and the youngest professionals all call Tacoma their soccer home.

Defiance Forward Alec Diaz said of the move to our city, “We want to provide for the city of Tacoma. It’s cool that they’ve made this team for Tacoma.” Whether teenager or player on loan from Seattle Sounders FC our city is part of their career journey.

Our game is not just shared by professionals. The Reign Academy and the Sounders Academy offer the chance at professionalism. Washington Premier FC, Harbor Soccer Club, the South Sound United League and many other organizations offer play for youth of all levels. 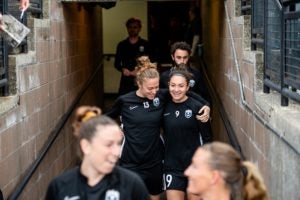 Not all of the players that call Cheney home had the variety of opportunity that is offered as soccer grows in the South Sound. Spanish World Cup player Celia Jiménez Delgado grew up in a soccer hotbed. She took the field with boys, because that was her best opportunity to better her game.

“I started in my hometown of Alcaudete playing with guys. I was the only girl,” Celia remembers. “I was called for the regional team. While I was practicing with them, a coach for Infantas Jaen — which was a girl’s team — he offered for me to play with them. That was the first time that I started playing with girls. Two years after that I was 14 and my home city, Jaen, made a team for the highest league.”

Celia joined Reign FC in February. In 2015 she went to the World Cup as a 19-year old. Defiance regulars Danny Leyva and Alfonso Ocampo-Chavez are headed to their age-level World Cups too. It’s the world’s game, right here nestled between Tyler, 19th, and Route 16. It’s a game beyond borders, without gender.