Flying in the warmth of the South Pacific and 1940s China, Pappy Boyington didn’t need a scarf like the fabled World War I flying aces.

He was rough and tumble. He flew at the beat of his own drum and didn’t do things like the other pilots of the time. He was better than most of them too. Whether wrapped in a scarf or donning his signature goggles, Boyington had an iconic look. Imagine an old grizzled fighter pilot, and the mind conjures a resemblance of Pappy. He is a man who became bigger than life. One of 82 marines to be awarded the Medal of Honor during World War II, Gregory Boyington was the Marine Corps greatest flying ace at the time. Media followed him and eventually a TV show was created based off his unit.

Boyington spent a couple years in Tacoma and a few more in Seattle. Some part of Tacoma came with him as he served in the Flying Tigers as a mercenary and later when he formed a squadron of pilots without combat experience and turned them into the mythological Black Sheep Squadron. Being the eldest of the fighter pilots, the press ran with making fun of his age. They also built his myth, telling the story of a fearless fighter who would fly head first into any battle.

The Lincoln High School and University of Washington grad earned his degree in aeronautical engineering and worked for Boeing for a single year.

The future flying ace left what could have been a rather calm life for the Corp in 1935. That’s when things changed dramatically. He was a poor flyer. He drank, brawled, and wrestled. He struggled with authority and defied some of the rigidities of life in the service. His defiance of convention started early in his service time. 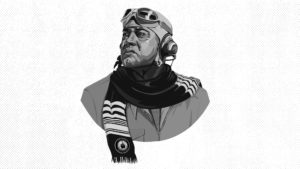 Get your own Tacoma Defiance scarf at the Tacoma Team Store

Two years later, he earned his wings. He wasn’t long for the Corp though. Motivated by pursuit of money, he left to join the Flying Tigers before the United States entered World War II. There he became an ace, depending on who did the counting. He was also frequently in trouble with his commanding officer. By 1942 he broke his contract and was dishonorably discharged from the mercenary group. His response was to rejoin the Marines.

Building a unit from extra planes and unfavored pilots, Boyington created something special. The Black Sheep Squadron went on to be one of the best in the Pacific. Pappy became their face and as he challenged to be the greatest ace in Marine Corp history the Idaho/Washington product became famous. The ace of aces overcame conflicts with leadership, drinking, and worries about family life back in the States, to tie the Marine Corps kills leader with 26 downed aircraft.

After being shot down by Japanese fighters in a fight that saw his wingman killed in action, Pappy was picked up by a Japanese submarine and held as a prisoner of war. While held in captivity , Pappy entered the hollowed ranks of the Marine Corps earning a Medal of Honor. When he earned his release he didn’t just find out about the Medal, he also insisted he took out two more planes than credited for during the battle In a few swift keystrokes and signatures he became the greatest active fighter pilot in the Marines and one of the most famous pilots in American history.

The rebel, drinker, carouser, fighter, and pilot was just like all heroes. According to Pappy’s autobiography “”If this story were to have a moral, then I would say, ‘Just name a hero and I’ll prove he’s a bum.’” Gregory Boyington was a bum and a hero, a defiant rebel and a Marine. Pappy was larger than life and most certainly not noble. But he’s clearly a Tacoma hero.

Where Jack is the type of Defiance fan that would hang out in General Admission and Thea would probably work the crowd in the Summit Club, Pappy is the Defiance fan who hangs out at R Bar. We think he would appreciate the views of the field and the roar of the Fires of Cheney. With a drink in hand, telling stories to a crowd, old Pappy Boyinggton would enjoy the communal atmosphere around Defiance soccer in Tacoma.

Military Times – They just don’t make them like Pappy anymore