Do you know the definition of baseball beauty?

Baseball beauty is when a clean-up hitter closes his eyes and whiffs at a nasty breaking ball in the dirt. When he chases straight cheese above his head; or better, gets frozen by a fastball on the black with two outs and the bases loaded.

Not many 23-year-old pitchers can create such horrendously magnificent art with their brushstrokes, but in 2019, Logan Gilbert showed that he can – 165 times to be exact.

Give Me Those Numbers

Gilbert, one of the highest touted prospects on the Seattle Mariners Taxi Squad, earned his way to this summer’s Cheney Stadium roster by punching out 165 batters in just 135 innings last season. That’s 11 strikeouts per 9 innings. It’s a beautiful stat line. The Winter Park, FL native ranked 11th among all minor leaguers in strikeouts in 2019, and 21st in whiffs per 9 innings.

Only nine pitchers in Major League Baseball finished the season with a strikeout rate that high. Sure, those nine guys were facing the best hitters in the world, but you don’t post those numbers in Minor League Baseball by chance.

It’s not just about strikeouts, though. With enough pitches, any Joe Schmo with a high-90s fastball can pick up 11 strikeouts. It’s about efficiency and limiting baserunners to limit runs.

Gilbert’s 2.13 ERA was better than all nine of those MLB strikeout studs’. He had a 0.95 WHIP, meaning he allowed less than one baserunner per inning, better than six of the nine Major Leaguers.

There was not a single pitcher in Minor League Baseball who threw at least 135 innings and had a lower WHIP than Gilbert in 2019. Not one.

What’s Next for Logan Gilbert? 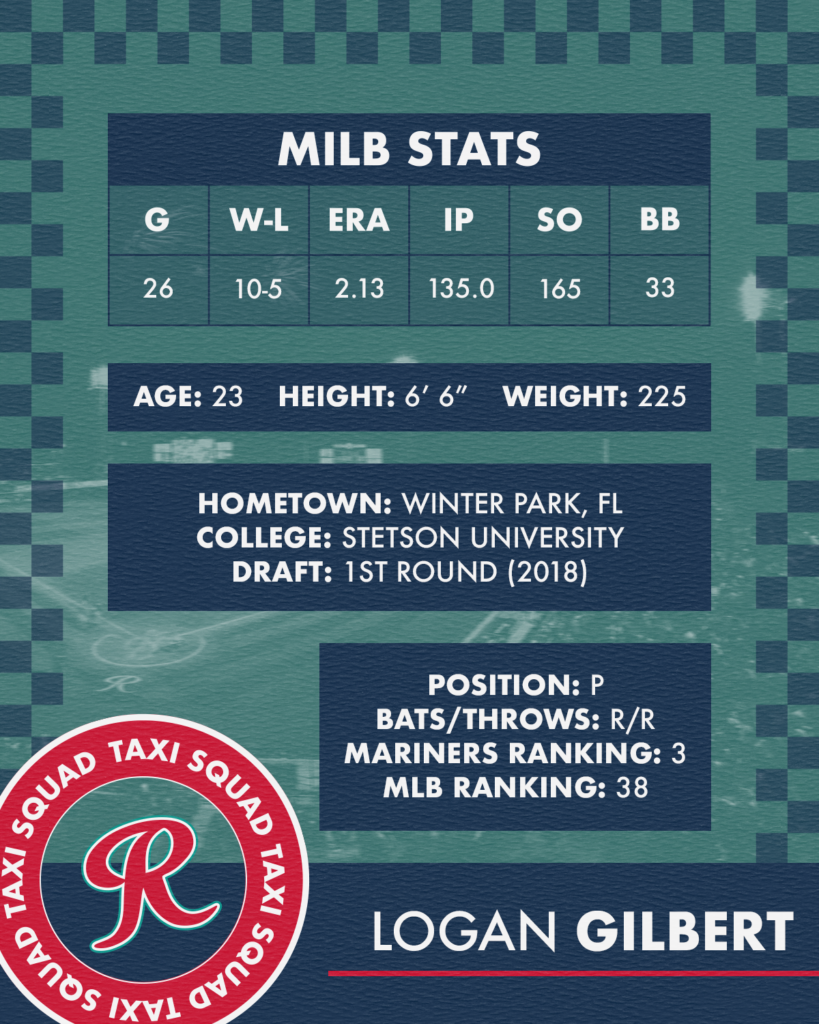 Last season, Seattle’s No. 3 prospect jumped from Single-A West Virginia to Double-A Arkansas, and allowed fewer baserunners with the Arkansas Travelers than he did with Advanced-A Modesto, meaning he handled every challenge put in front of him.

This year, the biggest challenge for Gilbert, and all prospects, is a lack of experience. No reps means few opportunities to improve. Will the pandemic and the loss of the Minor League Baseball season impact Gilbert’s development?

Not likely. After the first round pick was drafted out of Stetson University in 2018, he was immediately shut down because of a mononucleosis diagnosis (new indie band name?).

Anxious to play as a professional, his first season was over before it ever started. After a long winter, he spun an epic 2019 performance as if he hadn’t missed a day on the diamond.

What’s more is that the 6-foot-6 right-hander got the invite to Summer Camp, so he spent July up close and personal with sluggers like Jarred Kelenic, Kyle Lewis and experienced Major League vet Kyle Seager.

As much time as he lost because of the pandemic, the Mariners have Gilbert on the fast track to get up to speed.

At Cheney Stadium, we’ll be watching this young hurler’s 65 grade fastball, which MLB Pipeline has rated as the best in the Seattle system. If he’s going to keep mowing down hitters and limiting baserunners at the next level, it starts with commanding the heater.

After pumping gas by a hitter, Gilbert will turn to his slider, changeup and curveball, constantly keeping hitters off balance and racking ‘em up with the best in baseball.

It’s hard to stay mad when there’s so much beauty in the world.

We’ll keep you updated on Logan Gilbert and the rest of the Taxi Squad as they stay game-ready for their chance with the Mariners in this year’s abbreviated season. For the latest and greatest on the Taxi Squad, the Tacoma Rainiers and all things Cheney Stadium and South Sound culture, follow us on Twitter, Facebook and Instagram, and sign up for more at WeRTacoma.com.