Location is a key to any new business looking for a place to call home. While Incline Cider’s production facility is in Auburn, they needed brick and mortar in a community that celebrates the type of carefully crafted ciders they have been concocting since 2015. The Zehner family, led by the father-son duo of Chris and Jordan Zehner, looked throughout the Northwest for a place to lay roots. They searched not only for a place to set up shop, but also a place to call their own home. Tacoma was the natural choice for Jordan. 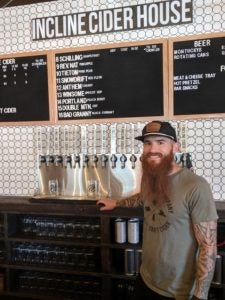 “We’re just normal simple-minded people. We’re not San Francisco or Seattle type people. We’re not big city types and Tacoma gives us the best of both worlds. You have everything you want for culture, community, and local business without having that overwhelming aspect in bigger cities. They have their great qualities, but not for us.”

The Cider House is in the Brewery Blocks. The project is part of what is bringing the Brewery District back to its roots.

In 1979 Tacoma’s Brewery District no longer produced beer. Columbia Brewery’s long history in Tacoma was over. Craft beer surged into Tacoma a couple decades later, but the Brewery District stayed without a signature occupant.

7 Seas took over the old Columbia/Heidelberg building in 2016, helping to awaken a sleeping giant. Contributing to the growing district, Incline Cider House’s operation is just down the road. 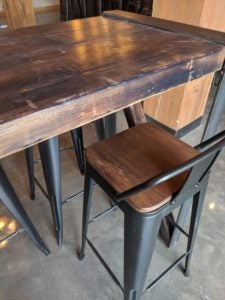 Incline’s bar stool and tables use wood from old buildings in the Brewery District.

“We worked with Ryan Demolition, another local business. They get into defunct buildings that are going to go away and they take all that history and try to save it. People like us can come in, breathe new life into it, and give it a new history.”

Being close to Tacoma is part of who Jordan is now. He and his wife moved to the city. He rides his bike to and from the Cider House regularly. You can find the two wandering the neighborhoods of the city, sometimes with their dogs, always exploring.

“Tacoma is small and still feels like a small town. I love the fact that it is just seven and a half miles wide. I can bike from my house to the other end of Tacoma in 15 minutes. Yet you have such an intense culture and community of businesses. It just resonates through the whole city.”

Incline started as “the biggest little cider company.” Their ciders are now available in grocery and retail establishments, spreading through the nation’s bars and homes. In an inverse of what is the norm in the beer and cider world, they are growing into a taproom after that large retail push.

By going small, they can now play with flavors in ways they have yet to try. The Cider House will let them play with single-apple offerings, rather than the blend they use at this time. Jordan also wants to play with Tacoma flavors.

“We will look to partnering with someone in Tacoma – a brewery, some other cidery, or a local farm. It will be a partnership for a Tacoma staple cider that encompasses why we are here. What does Tacoma taste like in a glass?”

Jordan and his family’s tours around the city will help discover those flavors. So will the people they meet along the way. Tacoma has welcomed them as new friends.

Their story isn’t one merely of a business opening in a city for opportunity. It is one of a family finding their place. The Zehner’s have committed to making this city better.

“We’ve met so many people here. Tacoma is very open to different people coming into the city. It feels like home.”