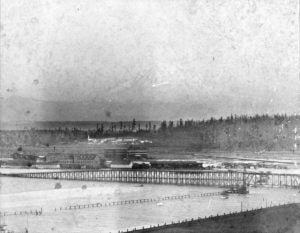 The Stanups, Jonas and Peter, were two who worked to hold settlers accountable and raise the status for the Puyallup tribe at the same time. Their influence in the 19th century is undeniable. They were leaders who sought a path between settler and tribe. It was a time when states coexistence, peace, war, and treaty violations could change daily.

Jonas’s story begins early. While not a chief, Stanup rose to an influential role due to his prowess at necessary life skills at the time. His proficiency as an orator that convinced the people of Puyallup and the people of Washington to agree to peace. That agreement was tenuous, and Jonas with son Peter, defended the treaty.

That defense at times involved violence. Peter was a warrior-poet. Writing news and fiction was his job. He is quoted in U.S. Geographic Board’s decisions about the naming of Mt. Rainier. In the 1880’s “Ti’Swaq” was the common name for the mountain among the Puyallup Tribe at the time.

Defending his people was Peter’s life. With his father’s reputation and his own responsibility, Peter pushed back against the illegal seizure of land.

Those land grabbers were backed by troops from the federal government. Trust earned by the Stanups and their just advocacy for the treaties meant that local support was split. Attacking while the tribe worked on a railway easement, those troops were breaking the law.

The King County sheriff came to support the tribe in its resistance and arrested those troops. Peter was murdered in the dark of night, almost certainly due to his brave, legal defiance. Jonas died a few years later, a combination of old age and heartache were credited for his passing. His final words are reportedly alki moosum (bye and bye I sleep).

Together, the Stanups worked to build Tacoma as a community of communities. Their connections between peoples were a foundation upon which the city, county, and tribes exist now. Without Jonas, the rails that grew the port do not exist. Without Peter, the territorial rights of the Puyallup Tribe could have disappeared. Both are heroes who rose out of troubled times.

The spuyaləpabš were here first.