“Fear is the mind-killer”

This phrase encapsulates the invented religion-philosophy of Bene Gesserit from Frank Herbert’s Dune. It is possibly the second most popular fictitious faith in pop culture and it rises out of Tacoma — resilient, hardened, and relentless.

Tacoma roots – with a dash of Oregon, a bit of California, a pinch of military service, and a life lived all around Washington – Herbert’s works reflect lessons that originate from his personal experiences. Like any award-winning author, those personal experiences are influences that combined with a feverish appetite for books. Dune was built on the imagination of someone who consumed literature, and consumed Tacoma.

His feats are worthy of legend. Herbert swam the Narrows, sailed the Salish Sea, and rowed Puget Sound. He lived in many of Tacoma’s neighborhoods and attended Lincoln High School up through his junior year. Tacoma had an eternal draw for him. He’d leave the area for work and inevitably find a way to return to the City of Destiny. For a time he was a staff writer and photographer with two Tacoma newspapers.

All the things you love about Tacoma and Puget Sound? Frank also loved them.

He did, however, hate pollution. It inspired one of the greatest science fiction novels of all time. It is an environmental polemic, warning about the decline of empires, exploration of gender dynamics, and a love letter to Buddhist philosophy and the Arab peoples. Dune defined a generation of science fiction.

Dune’s Fremen are inspired by Orientalist tropes and are also environmental stewards. They make Arrakis-the setting for the book’s story- livable. That environmental stewardship is part of what inspired Metro Parks Tacoma to name the old ASARCO Superfund site Dune Peninsula Park with Frank Herbert Trail connecting it to Ruston. 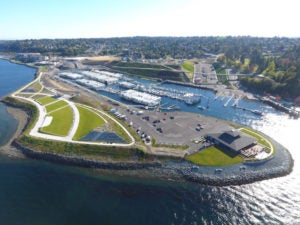 “The theme in ‘Dune’ of a world destroyed by environmental catastrophe drew in part from Frank Herbert’s life experiences in Tacoma, which in the 1950s was one of the nation’s most polluted cities,” said Park Board Commissioner Erik Hanberg, a sci-fi author himself who pushed for the park name to reflect Herbert’s legacy. “The characters in the novel have a goal to ‘terraform’ their planet back to its inhabitable origins. That’s what we’ve done here. We have terraformed a polluted wasteland into a beautiful environment for all to enjoy.”

Over the last weekend Tacoma named a park after its most famous author. Dune Peninsula Park and Frank Herbert Trail are on the waterways he explored as a youth. The old source of pollution is now a modern waterfront park where, just maybe, the next great Tacoma writer creates their story.

KNKX – ‘Dune’ And The City Of Destiny: How Tacoma Inspired One Of The World’s Most Acclaimed Sci-Fi Authors

The Guardian – Dune, 50 years on: how a science fiction novel changed the world

Dreamer of Dune: The Biography of Frank Herbert is available at King’s Books.

Kristopher Negron Returns To The Show