“Too old.” “Too American.” “Too inexperienced.” 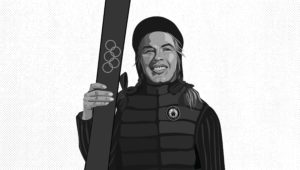 Gretchen is wearing a toasty vest and you should too.

These were the ways Europe discounted Gretchen Kunigk Fraser as she entered 1948’s Winter Olympics in Switzerland. She proved that she was totally Tacoma. Almost too much. Training at Paradise on Mt. Rainier/Tahoma the allegedly past-her-prime skier took her Tacoma heritage and turned it into glory for country. Her gold and silver were just a hint of how good she was. While World War II caused the world missed out on Gretchen’s greatness, the Pacific Northwest did not.

In the ‘30s the National Park Service installed a single tow-line to run from Paradise Lodge to Camp Muir. That’s where Gretchen learned. These weren’t modern, manicured slopes, but a casual run. With a course that started nearly two miles in elevation, the weather was quite different than Tacoma’s coastly sea level. The Kunigk family needed to prepare for light rain and snow throughout their day. They also needed layers. A puffy vest with a water-resistant outer shell would have been ideal if it had existed in 1935.

It was shortly before Paradise hosted an Olympic qualifying event that the races there started to be conducted in the single timed-run style they are now. Gretchen trained and raced in a mass start program that would sometimes cause its entrants to cover miles in deep snow with a drop-in elevation of up to a mile.

The Tacoma native somehow managed to qualify for the 1940 Olympics. Then it was cancelled. She likely would have made the 1944 Olympics if they had happened. In her prime she worked through form issues, learned new racing styles, and remained unknown due to the combination of World War II and practicing in the backwaters of Mt. Rainier/Tahoma and Sun Valley, Idaho. Europe wasn’t ready for an older American woman to be any good.

Like any proud Tacoman, Gretchen wasn’t concerned about outside notions of “proper” technique or composure. Like every great champion, her focus was on a single thing – winning. That’s just what she did. Defiantly and proudly. Carrying the banner of Tacoma, Paradise, the Pacific Northwest, and all of America with her.

Gretchen was not just the first American to win an alpine skiing gold, she was the first English speaker to win a Winter Olympic gold. Her history was recognized by University of Puget Sound and the Pery Award in England (the first non-Brit to be awarded such distinction).

She may just have been the best woman on skis in the 20th century. She is most certainly a defiant hero of Tacoma.