Sixteen matches into the 2019 season, Reign FC suffered their second home loss on August 11, falling 3-1 to Utah Royals FC. The loss came just two weeks after the team was dealt their first home loss of the season, a 4-0 loss to the Chicago Red Stars.

Despite the periodic setbacks, including Sunday’s loss to Utah, and ongoing challenges created by the extensive injury list—including the absence of Megan Rapinoe—the club has continued to demonstrate tremendous adaptability and resilience in finding ways to take points and maintain a spot in the top four of the NWSL standings.

New additions to the squad have helped the team overcome the loss of key players. Reign FC midfielder Rebecca Quinn, signed by Reign FC on July 15, started her first match in the loss to Utah, playing the first 60 minutes of the match.

“It’s been a seamless transition,” Quinn said post-match. “The coaching staff has been great, same with the players. It’s surprising that it’s been three weeks or so. I feel comfortable in the environment already.” 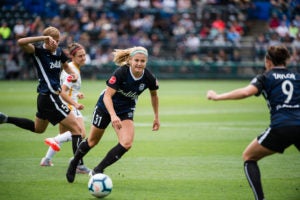 Another newcomer, midfielder Rosie White, powered the team’s response to the loss to the Red Stars, scoring the game-winning goals in both the road match in Houston on August 2 and at home on August 7 against the Portland Thorns. White played a full 90 minutes against Utah, attempting four shots on goal in the effort.

While the newcomers have been brilliant filling the massive gaps left by senior players such as Jess Fishlock, Michelle Betos, and Jasmyne Spencer, Reign FC head coach Vlatko Andonovski credits his veterans for creating a cohesive environment, mentioning that leaders such as defender Lauren Barnes and midfielder Bev Yanez lay the foundation when it comes to keeping spirits high and working together through the good and bad.

“Usually those standards and core values are established by the more experienced players, those players that have been here for some time,” said Andonovski. “It’s the players that know the ins and outs of the game and the locker room. I want to give lots of credit to those players because they’ve done a great job.”

“It’s so hard to come into a team as a young player and break in, so I try to make them understand that we’re there to help them succeed,” said Barnes. “We don’t want them to be scared, we want them to be brave.” 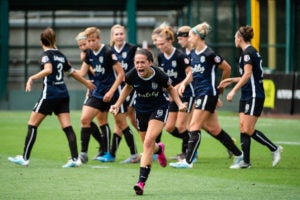 Forward Shea Groom—another newcomer this season—rifled home a shot in the 41st minute of the Utah match, leading to a celebration on the field that acknowledged her teammates on and off the pitch. Andonovski wouldn’t be surprised if his whole team could figure out a way to celebrate together.

“If there is a way for all of them to celebrate in one spot I’m sure they would do it. We have injured players, so she wanted to share the joy with them, but also the players on the bench. For those players on the bench it’s almost like they are on the field,” Andonovski said. “They want to help in any way possible and the players on the field want to recognize that as well. They’ve seen different types of cultures, and they know what it takes to create a healthy, safe culture where everybody can develop.”

Andonovski beams while saying this is a goal of his for the club.

“It’s something that I pride myself in. It’s a culture and an atmosphere that we enjoy working in. I don’t know if I would want to be here if the culture was not as it is.”