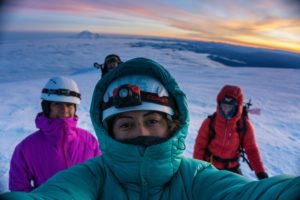 “I decided I wanted to climb a mountain.”

Those are the words Krystle Edwards told her friend Liz Daley in 2014. Liz was certified, sponsored, and one of the climbing world’s rising talents. While the desire was in her heart, Edwards never joined her best friend on that journey.

An Argentinean avalanche took Liz away from Edwards, Tacoma, and the climbing community just a month after Krystle’s declaration. That loss changed Krystle Edwards’ life. That’s when she got serious about climbing. It served as honor and tribute to Liz.

No longer would Edwards try for “a little baby mountain.” Instead, her first mountain was Mt. Baker – all 10,781 feet of it.

“If you go up the Roman Wall the last half mile is like this [her hand is flat and vertical]. The kick steps were so big. I was literally lunging up the mountain.”

Edwards didn’t quit. She conquered that mountain. On the way, she learned to love mountains as her friend had. Since then Edwards scaled Adams, Rainier, and St. Helens.

The lessons learned from those climbs Edwards carries into her other projects.

Next year all of Tacoma will get to enjoy one of those projects – the Liz Rocks Foundation climbing wall at Point Defiance Park will likely open in summer 2020. The Foundation raised over 150k for the project. Edwards is the executive director and encountered obstacles that challenged her in new ways. 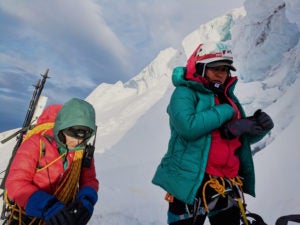 Spirit and teamwork helped her overcome Mt. Baker, and fueled the Foundation.

“You work hard for this idea, this vision. You have these ups and downs, you hit a roadblock and wonder if this is going to work. You have to just keep going. But when you get there it’s amazing.”

Edwards is a former soccer player at Stadium High School and Tacoma Community College locally. She also played for a small college in Oregon, until injuries forced her off the field.

Tacoma is a massive part of her being and her success. Like so many, she left for school and came back. The network of friends who returned to Tacoma and Pierce County fueled Liz Rocks.

“We all went off to college, and I find that a lot of these people are back in Tacoma. A lot of the Liz Rocks support came from friends and family. Because they are people who wanted to make a difference. This is our home. “

Liz Rocks, and of course Liz Daley, inspired Edwards to do even more. Edwards is already part of the Mayor’s Bloomberg Harvard City Leadership Initiative.

“I think Tacoma is this place that’s really innovative. I think the stuff that Mayor Woodards is doing with creating the conversations with the police department are innovative and important.”

Mountain climbing, a charity foundation, community engagement with the city, a full-time job – that was not enough. Edwards also decided that she needed to share her lessons with other women in Tacoma. 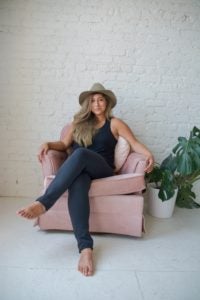 She founded Grit City Women. The female forward networking and education organization is her next step in helping Tacoma be stronger. The goal is to share the lessons she learned in growing Liz Rocks and find other women who have grown through Tacoma.

“I realized later on that it would have been nice to have a network of people who have that experience so I could hire, or at least get feedback on how to do things; I thought “why don’t we know each other? Why isn’t there a platform for this?” That’s when I started Grit City Women.”

The network is up and running. A collection of athletes, artists, Ph.D.s, financiers, and more share their experiences at monthly sessions.

“The speakers are women from Tacoma that are doing awesome stuff who share their story. They are inspirational stories with tips and tricks, lessons that they learned. You get education and inspiration. They give you energy.”

It is a familiar energy – part grit, part destiny. Back when Liz Daley inspired Krystle Edwards to climb a single mountain magic happened. Their friendship became the fuel for Edwards varied life, one that will honor her friend with a functional monument right in their once-shared home.

“We have a sense of stewardship for when the wall goes up, and a place to remember her at. That’s for me, why I want to stay. We have an investment in the community here.”