Who quits? Not Tacoma. Not Defiance. This season – this year – it isn’t what anyone planned. But there are bright points. There are those connections between club and community. The electric restart with  wins against Portland (and two more times to do that!), the signings by the First Team, our new guys – they all show that these last few games of the 2020 season have a lot to look forward to.

Coach Chris Little points out that the Tacoma Defiance season has similar challenges to real life in this challenging year. It has forced a young squad – averaging just over 20 years old – to adapt to conditions that no one ever expected. The season ends with two matches a week for three weeks.

“We have this fixture list, and it’s just about adapting. It will be good to get in a rhythm of work. All the other teams are in similar situations. We adapt and get on with it.”

We are a City of Defiance, and the final six matches on ESPN+ will show the nation that Tacoma remains strong in its love of crafts both fine and stompy. 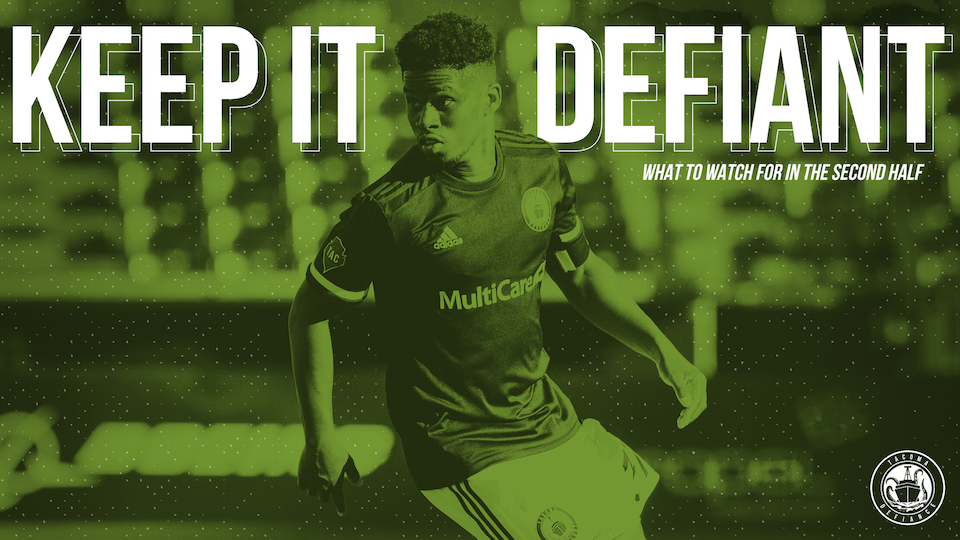 Mountain-lover Taylor Mueller needs one of his companions to step boldly into passing lanes and massive bodies. Who can join him in wearing black ink that shows not just love of the Sound, but a spirit of iron and the soul of the longshoremen?

Little has seen strength from his starting centerbacks.

“Sam Rogers has put some good performances together. Taylor Mueller has given us stability and leadership that we needed.”

But the man who takes that role and makes it their own can be the next Mueller, Marshall, Frei, Anderson, Foss. They can be the helper, the builder.

Alec Diaz blasted out of the re-start gate showing a flair for dramatic shots. If he can repeat those first few matches to end the season, he could sign a new deal in rave green rather than black. Diaz knows the fundamentals, now is time for artistry to become routine. Soon will follow a gallery full of his good works.

“He had a goal-scoring streak and showed that he’s a real threat.”

When Alfonso Ocampo-Chavez is on the wing with Defiance he offers a direct attack, hungry for the net. His combination of speed and power can excel in open space out wide. He needs to cook, meshing his spices with great service.

There are other artists ready to write their futures. They have the potential to emerge in these next few games as more than an esoteric garage band, but one of the nation’s greats. They must keep knocking and the sleeper will awaken.

Over the past 18 months, six players have earned the nod to the First Team with another being picked up by Inter Miami FC. The organization gave minutes to more players under 18 over that stretch than any other in America.

Someone is going to show what the future of Defiance holds, and you can be the one that says ‘I was there when’ even if “there” is on a monitor while we remain socially distant.

Watch Tacoma Defiance on ESPN+ for the rest of the 2020 when the future of championships takes the pitch around the Western U.S. and Cheney Stadium.

We’ll be back offering you a cold one, a scarf, and a flag again soon.