At 31 years old and nine months removed from a partial posterior cruciate ligament tear, Reign FC midfielder Allie Long knew that she was regarded by many as a longshot to make the U.S. Women’s National Team World Cup roster. After her name was on head coach Jill Ellis’ list of 23 players released last Thursday, Long is proud to have made the final cut and head to her first Women’s World Cup. 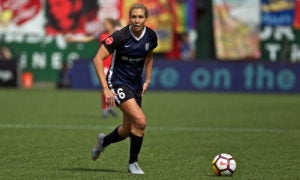 “The entire process has been pretty wild,” Long said. “When Jill called me on the phone, I was with my husband. At first I thought, ‘this could either be good or bad,’ but she sounded really happy so it made me a little calmer. She told me that I had made it. I was in tears, I’m not going to lie. I said ‘thank you’ and then I called my parents. (Megan) Rapinoe called me and I told her. I told Alex (Morgan) and Kelley (O’Hara). I thanked (Reign FC head coach Vlatko Andonovski) for helping me so much the past year and being a mentor to me this whole time.”

“The past 24 hours have been a lot, but they’ve been great,” Long said on Friday.

Now Long is off to camp for the final phase of preparation ahead of the U.S. WNT’s first match against Thailand on Tuesday, June 11 at 12:00 p.m. PT.

Long has been part of many camps with the national team, dating back to her 2014 debut in a friendly against Canada. Still, nothing can compare to the pressure of top-level international soccer. Thankfully for Long, she has valuable experience, having played three of the United States’ four matches at the 2016 Olympic Games in Rio.

“I feel like the Olympics gave me the best experience that I don’t think that playing friendlies or even tournaments like the SheBelieves Cup can ever prepare you for,” Long said. “That feeling of being able to perform and feel those feelings, I think that was a such a great learning experience. I am also always leaning on my friends (for advice). I’m always asking questions of Pinoe and Alex and Kelley. I want to be the best player possible. I lean on them, they’re great. To have (each of them have the experience in) three World Cups, they’re the perfect people to be going into your first World Cup with.”

Long, who had previously said that she would do “whatever it takes” to make the squad, now faces the weight of the pressure that follows the U.S. WNT everywhere it goes.

“I think (the expectations) are exciting,” Long said. “It pushes me to be my absolute best every single day. It always has, but knowing it’s the World Cup, knowing what this means (makes it more). This is a dream for me, it’s a dream for everybody else. I’m representing the country but also having my girls’ backs, all 22 of them. I have to be on point, on my A-game 24/7, and making sure that I’m doing my best to be the best teammate and player that I can be every single day and giving everything I can to make sure that our team is successful.”